The CEO of Tesla and Founder of Space X, Elon Musk, has clarified via Twitter that the electric vehicle company has not sold any Bitcoin. Elon Musk made the statement in response to another tweet by the team at @BTC_Archive who pointed out that Bitcoin had dropped by 20% since Mr. Musk started ‘sh*tposting’ on the social media platform.

The two tweets can be found below.

To clarify speculation, Tesla has not sold any Bitcoin

What Really Happened And Why Was Elon Musk Trending on Twitter

The dip by Bitcoin and Elon being the center of it, started when popular Bitcoin community member, Peter McCormack posted a 24-part Twitter thread attempting to convince Mr. Musk that his recent criticism of Bitcoin was ‘poorly informed’.

In addition, Peter McCormack pointed out that Dogecoin was a meme-coin and Elon Musk should consider the potential of DOGE holders losing money in the long run due to his actions. An excerpt of the 24-part Twitter thread can be found below.

Doge is a meme, a joke, it has no real developers and long-term serves little purpose beyond coin-flipping…

When the rug pulls, and it will pull, Doge bag holders will be holding nothing but a bag of dog shit. They will lose money and many will have invested because they have not had the time to do the hard work and they will believe you.

Elon Musk’s response was swift by stating that ‘Obnoxious threads like this make me want to go all-in on Doge’. A screenshot of his response can be found below. 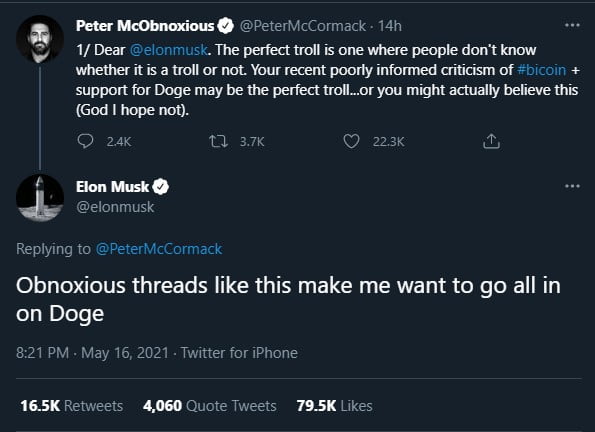 Speculation Rises That Elon Might Have Sold Tesla’s Bitcoin

The Twitter thread by Peter McCormack elicited a wide range of responses with crypto community member @CryptoWhale suggesting that all the negative responses towards Elon Musk might cause him to dump Tesla’s Bitcoin holdings. The add to the speculation, the Tweet by @CryptoWhale got a response from Elon Musk which was understood by many to mean that Tesla was selling its Bitcoin.

Below is a screenshot of both tweets. 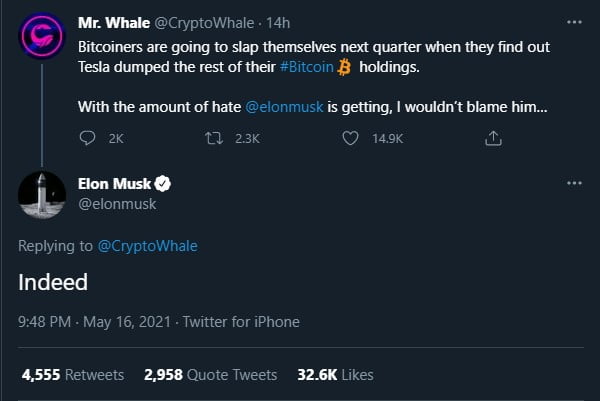 The speculation as to whether Tesla was selling its Bitcoin holdings led to the price of BTC dropping from $48k levels to a local low of $42,196 – Binance rate.

However, as soon as Elon Musk tweeted that Tesla had not sold its Bitcoin, the price of BTC pumped back up within minutes and is now trading at $44,900.